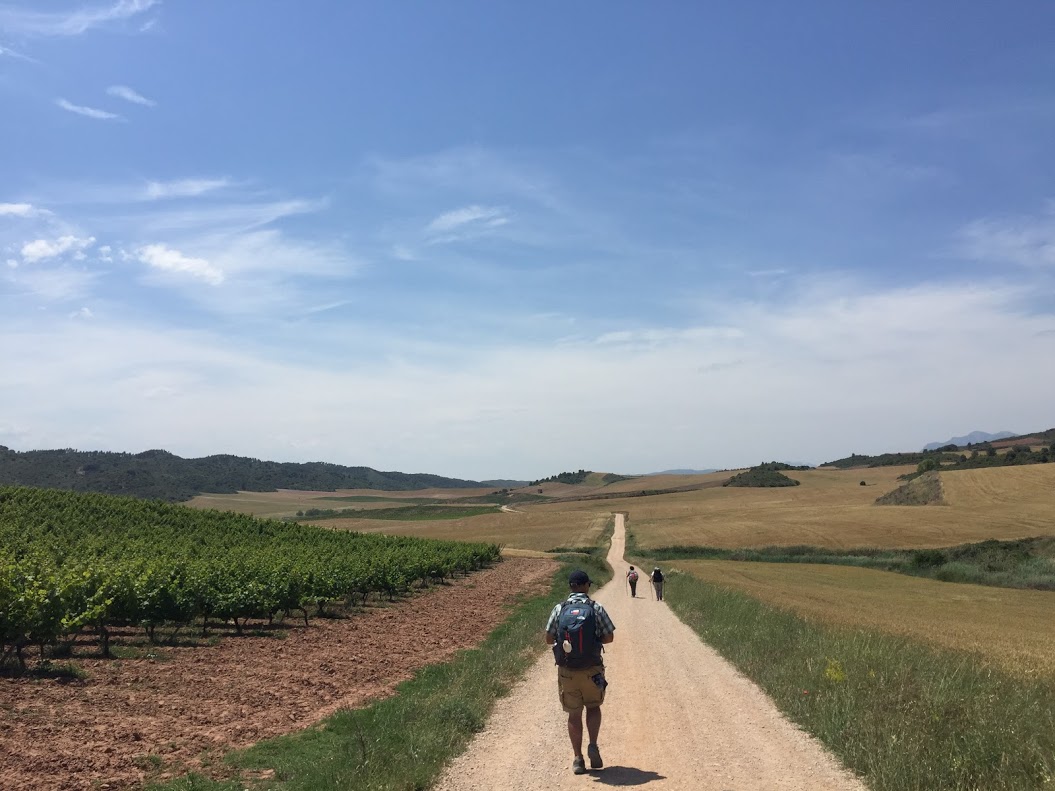 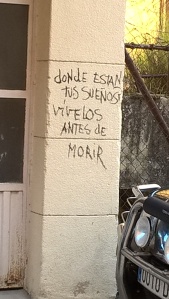 There is a lot of graffiti in Spain and it seems like they don’t go to a lot of effort to clean it up. Along the Camino, much of the graffiti is inspirational or thought-provoking. As my body began to get in shape, I became more attentive to the mental/spiritual/non-physical side of pilgrimage. On the way out of Estella, we came across graffiti that was a great catalyst for this morning’s introspection.

“Where are your dreams? Live them before they die.”

These are good thoughts whether you’re walking through Spain, sitting in your cubicle at work, stuck in your car in traffic, or sitting at home wondering what to do next.

Where the Wine Pours Out of the Wall – We spent some time in Irache, not far up the hill from Estella. There are a couple of cools things here – Fuente del Vino, Fount of Wine for my English-only friends, and the Monasterio de Irache.

As the name implies, the Fuente del Vino is a fountain of wine. It looks a lot like the water fountains that we’ve used along the way – the only difference, this one dispenses the “fruit of the vine.” After a stop for some breakfast wine, we went on to the Monastery. It has been vacant for a while because there aren’t enough Benedictine monks to occupy it, that’s a shame – the Benedictines have a good practice and this was/is a beautiful facility. 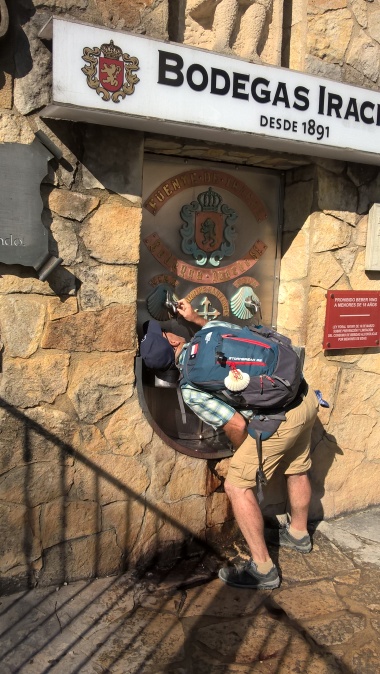 The Omelet Sandwich of Villamayor de Monjardín – We stopped for lunch in Villamayor de Monjardín. It was the high point of the day, literally and figuratively. The village sat atop a hill that was the peak of today’s hike. And for lunch, I had an omelet sandwich that turned out to be my favorite meal of the entire trip! Good food and beautiful views in every direction, it’s hard to beat such a lunch.

Food Trucks in the Middle of Nowhere – The walk from Villamayor de Monjardín was a little over six miles and downhill most of the way. What made the afternoon difficult was exposure to the sun. As we neared the La Rioja region, shady forests were replaced by vineyards, olive groves, and wheat fields, not much in the way of shade. Still, it is a beautiful hike and there is a food truck at the halfway point to provide shade and the necessary fuel (water, coffee, freshly squeezed juice, beer, wine, snacks) to propel the pilgrim into Los Arcos.

The Food Truck had a Mexican flag bumper sticker on the back. Turns out the owner is from Mexico, and further, spends two weeks of every year in San Antonio! We are practically neighbors.

Los Arcos – we arrived in Los Arcos in the middle of the afternoon. As has been our practice, we didn’t make reservations at any of the albergues on the Way. We arrived at our first choice and found “there was no room in the inn.” We backtracked (don’t underestimate the difficulty of backtracking at the end of a long day) a quarter of a mile to our second choice albergue. Luckily, there were beds for us. 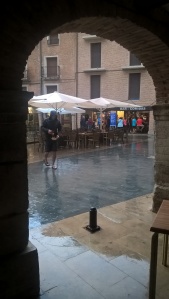 After we settled into our lodging, showered, napped, and communicated with the outside world, we went into town for supper. It started raining about the time we found a table at the Plaza de Santa Maria. No problem though, we picked up our table an moved it under the awning of a business on the plaza. We ate AND stayed dry(ish)!

A refreshing and relaxing end to a good day.