It was a foggy start out of Atapuerca this morning and the fog remained until the high point of the trail, Cruz de Matagrande. It lifted as we began the descent into Burgos. 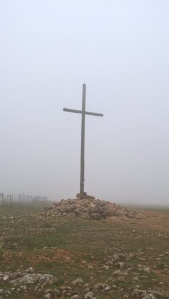 Cruz de Matagrande was only a few kilometers from Atapuerca but was the highest part of the trail to Burgos. Past the Cross, it was downhill all the way into Burgos.

It wasn’t long until the fog lifted and it turned into a very nice morning.  As we walked, we talked about how nice it would be to have donuts (not a spiritual conversation), thinking that when we arrived in the city, we might come across a Dunkins or Shipley’s.

Finding no options in Villaval, we walked on to Cardeñuela Riopico and stopped at the first place we came too, the Bocateria San Miguel. This delicious little place served a hot bacon & egg breakfast and also had chocolate frosted eclairs! It was amazing, and as an homage to this little place, the link above is a map to the Bocateria should you find yourself in need of a good breakfast!

After breakfast, we walked on to Burgos. I think it was on the other side of Cardeñuela

Riopico that we saw this art on the side of a building. It was definitely worth a picture and some reflection…at this point of the pilgrimage, I would love to have been sitting in a recliner without the pack on my back and the kilometers ahead of me.

And now, writing these words months later and sitting in a recliner (fully clothed, mostly), I find myself dreaming of the opposite. Not the recliner, but the pack and the walk on the Camino.

It wasn’t long until we were on the outskirts of Burgos. We took the river option and walked most of the city through a park that runs along the Rio Arlanzón, it was a nice walk.

We arrived in downtown Burgos around 1:00 pm, settled in, and then went to explore the city. The old town was beautiful and the Catedral de Santa Maria is one of the most stunning feats of architecture I’ve seen. Here is a picture but it does not do the real thing justice. You definitely need to go see it for yourself.

Tonight was the last night together for Jimmy and I. He is going to start working his way back to the US tomorrow. We explored the city, had a few Rioja wines, watched some street musicians, and had a decent American hamburger for supper.