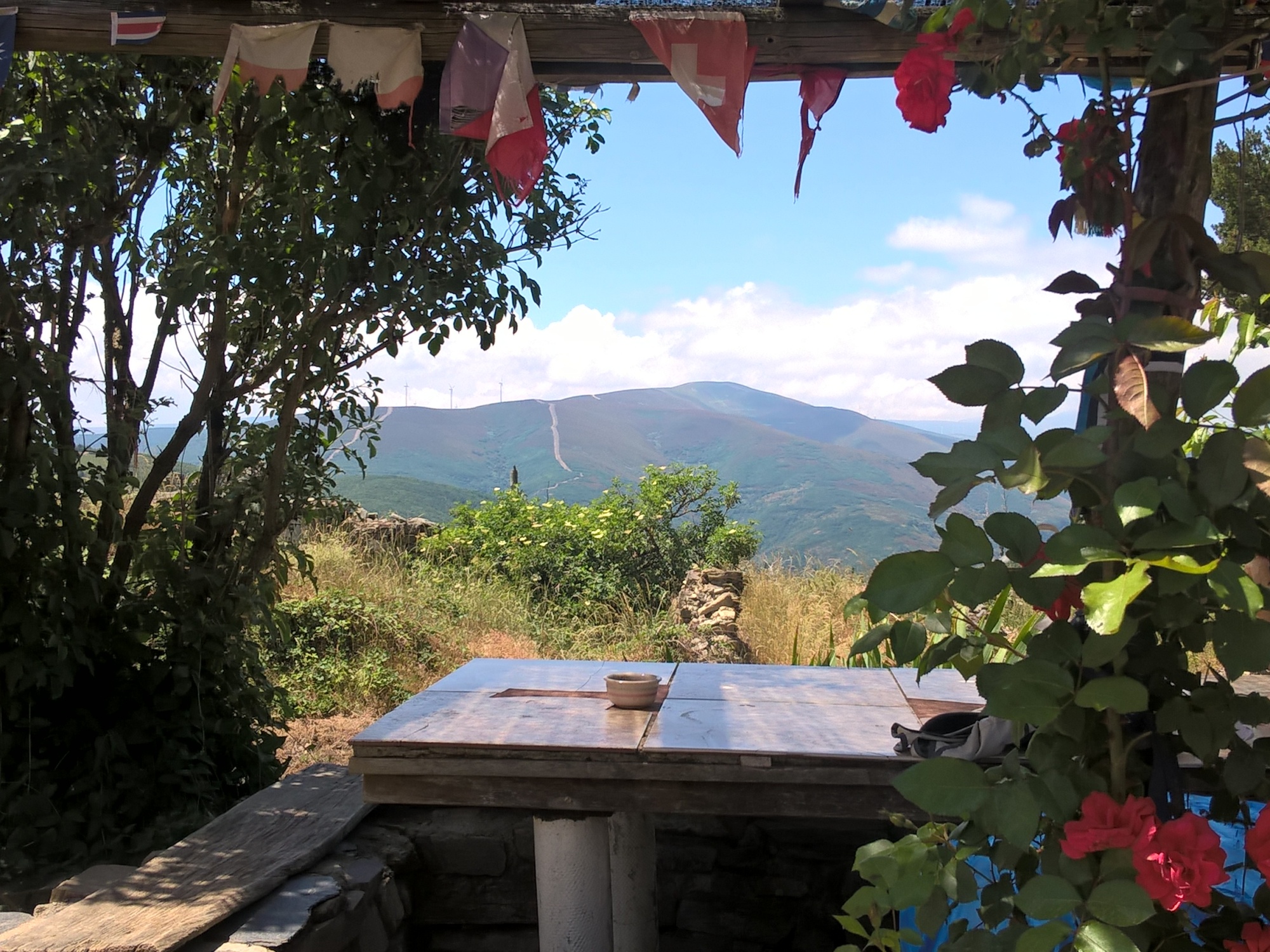 Today’s hike was the literal and figurative high point of my Camino. Literally, the path from Santa Catalina de Samoza to El Acebo crosses the highest elevation of the Camino Frances, the Alto Altar at 1515 meters above sea level. Figuratively, it was many things – the anticipation of mountain hikes after days in the Meseta, the flora and fauna reminded me a little of home, the bicycle story of Foncebadon, Cruz de Ferro, the mountain views, Manjarin, and the fine albergue on the outskirts of El Acebo.

I slept until seven this morning, the latest since entering the Meseta. I knew we would be gaining elevation today and the morning was supposed to be overcast, so no need to try to race the sun to the west today. Eva left before sunrise, leaving Nicole and I to trail her. We didn’t know her destination for the day and assumed we wouldn’t see her again. That’s the way of pilgrim life, many good people come in and out at the right time, but only a few become part of the Camino family.

The first 5 kilometers or so out of Santa Catalina were mostly flat, not much different than the plains we had just left, but the mountains pulled us forward. Months before setting out on my pilgrimage, I was reading one of the guidebooks. On one of the maps of this particular guidebook was a placed called “Cowboy Bar.” Being from south Texas, I have some experience in cowboy bars and made a mental note to spend some time at this place. Today was the day! The first village after Santa Catalina is El Ganso, home of the Cowboy Bar. Even though it was only 8 in the morning, I planned on having an Estrella Galicia and taking a few selfies in the place. We found the Cowboy Bar closed upon arrival, which is probably for the best. Beer for breakfast is not good preparation for a mountain hike. The path begins to gain elevation after El Ganso. It gains even more from Rabanal del Camino to Foncebadón.

Foncebadón reminded me of a random town in a John Wayne or Clint Eastwood western, a few old buildings, a dusty main street, and more animals than people. I made a mental note to stay on here on my next Camino. It was on the dusty main street of Foncebadón the aforementioned bicycle story took place.

Before I jump into the story, there are two things about me that are relevant to the story. One, I like to think I have a sophisticated, well-developed sense of humor. Others might say it is quirky and sophomore-ish. There are things that make me laugh that won’t even elicit a smile out of someone else, like the story I’m about to tell. Secondly, by this point of my pilgrimage, I had developed a love-hate relationship with the biciclistas. Love because I am commanded to love my enemy as myself, and hate because of my encounters along the Way. Coming up from behind me out of nowhere, clipping my arm as if they had sole rights to the trails. Their arrogant little bells announcing their presence a quarter of a mile away. Being the first to arrive at albergues and taking all the best bunks. Hanging their polyester biking outfits all over the albergue like Tibetan prayer flags in preparation for a Puja ceremony. I could go on. There were times on the Meseta that I was convinced I would end up in a fistfight with a European bicycler. I know, I know…fistfights and hatred and anger have no place on pilgrimage. I’m normally a pacifist but some of these guys brought the worst out of me. I will eventually pray and ask forgiveness, but if you’ve walked the Frances route, you know what I mean.

Anyway, back to the story. As we entered the low side of Foncebadón, the steep, dusty street rose above us. A howling wind came from the far end of town and barreled down on us, it made the walk difficult. Struggling 20 meters ahead of us was a biciclista. Most riders would get off the bike and walk it up the steep, windy hill. Not this guy, he had it geared down to the lowest gears and was furiously pumping his legs trying to maintain his uprightness and forward momentum. We were in a race to the top with him and we passed him, on foot, in the center of town! Not only that, we beat him by ten seconds to the only open bar in town. He sat at the table next to us, huffing and puffing while drinking his cafe con leche. It was here that I made peace with bicyclers on the Camino. It is difficult to walk five hundred miles. And I’m sure it’s hard to ride a bicycle five hundred miles. In fact, there are some sections that are more difficult on a bike than on foot. I realized we’re all doing something good, and something challenging, and we all have our crosses to bear. Still when I think of his legs pumping like pistons in an engine and the bedraggled look on his face as we passed him, I chuckle. If only I’d had the presence of mind to video the episode!

We were back on the trail after our fifteen minute break in Foncebadon. Our next target was Cruz de Ferro, two kilometers up the hill. When we arrived at the cross, our timing was fortunate. Two large tour buses were loading passengers that had spent the morning here. When they drove off, it was only Nicole, another pilgrim, and I. There seemed to be an understood courtesy here, wait patiently to the side while a pilgrim spends time under the cross. Nicole and I stood to the side while the pilgrim ascended. He stayed for about five minutes and then Nicole went next. When she finished, I went up.

The Cruz de Ferro is one of the iconic places on the Camino. I have a growing list of things I will do differently on my next trip, spending more time here is on that list. Pilgrims are encouraged to bring a rock from home and leave it at Cruz de Ferro, symbolically relieving themselves of the burden. I forgot to bring rocks from home, and it was unlikely they would have survived the great purging at Roncesvalles, but still the time atop was meaningful. It was interesting to read the prayers and thoughts and stories left on the mound. I was here for 30 minutes but could have easily spent hours there.

The most intriguing thing I saw was a baseball with “I MISS YOU” written between the seams. Someone purposely carried this baseball from another country and placed it under the iron cross. My mind wondered – was it a son who had lost his father whom he played catch with? Or a father who had lost a son whom he had played catch with? A brother? A best friend? A wife? A mother? A sister? Was it a death or a fractured relationship? I’ll never know. This baseball was just one of many… 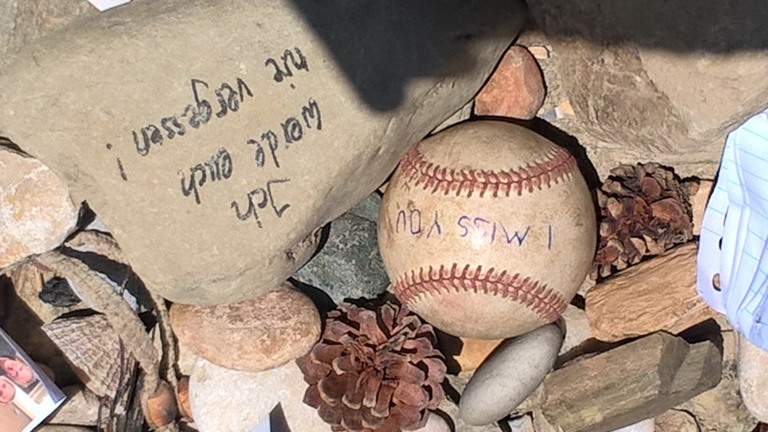 The mound at the base of the iron cross is an accumulation of 5 centuries or so of pilgrim prayers, thoughts, desires, and regrets. After my walking meditation around the top, I called the mound, “The Great Longing of Mankind” – to know forgiveness, to know comfort in great despair, peace in great fear, to hope that everything will be okay, to be reminded that new beginnings are always just a breath or step away, to refuel the hope of reunion, and to know the human ability to overcome. I was humbled and filled with hope. I went down into the woods to search for three rocks. When I found them, I went back to the top, placed them on the pile and uttered a prayer. It was time to move westward.

Two kilometers down the hill from Cruz de Ferro is Manjarin, one of the most interesting places on the Camino. The town boasts a population of one, a modern-day Knight Templar. There’s an off-grid albergue here that is linked to a 12th century albergue ran by the Knights Templar. It is one of those places on along the Way where one is acutely aware of their place on the pilgrim continuum. This place was made better by the donativo offering coffee, tea, and bread and the spectacular views of the surrounding mountains. While the citizen of Manjarin discussed Templar history with a peregrino, we enjoyed hot tea on the patio. Two more pilgrims came off the path and joined us, an older and younger lady. The lady had seen the Texas flag patch on my backpack earlier, and now asked:

“What part of Texas are you from?”
“San Antonio, you?”

I could tell from her accent she was a fellow-Texan. She was from Houston and the young lady, her niece, was from San Marcos, a student at Texas State University. The older lady had flown from Houston to Spain in the third week of May and had been walking since then. Her goal was to finish in Santiago, or Finisterre, didn’t matter which, by mid-August. Her pilgrim strategy:

“If I get tired, I rest. I I get hungry, I eat. If I want a beer, I drink a beer, or wine. If I see something beautiful or something that interests me, I stop and look.”

After Manjarín, it was a few kilometers climb to the highest point on the Camino Frances and then downhill all the way to Acebo, my off-stage destination for the day. As I mentioned earlier, today’s walk was my favorite of the entire journey. But that steep downhill walk from Alto Altar to El Acebo on tired knees was a challenge. My knees ached and creaked all the way down.

My albergue for the night was fully self-contained so I was able to take of everything without leaving the premises. This left me free to sit on the terrace, sip wine, and enjoy the views of the mountains to the west and north.