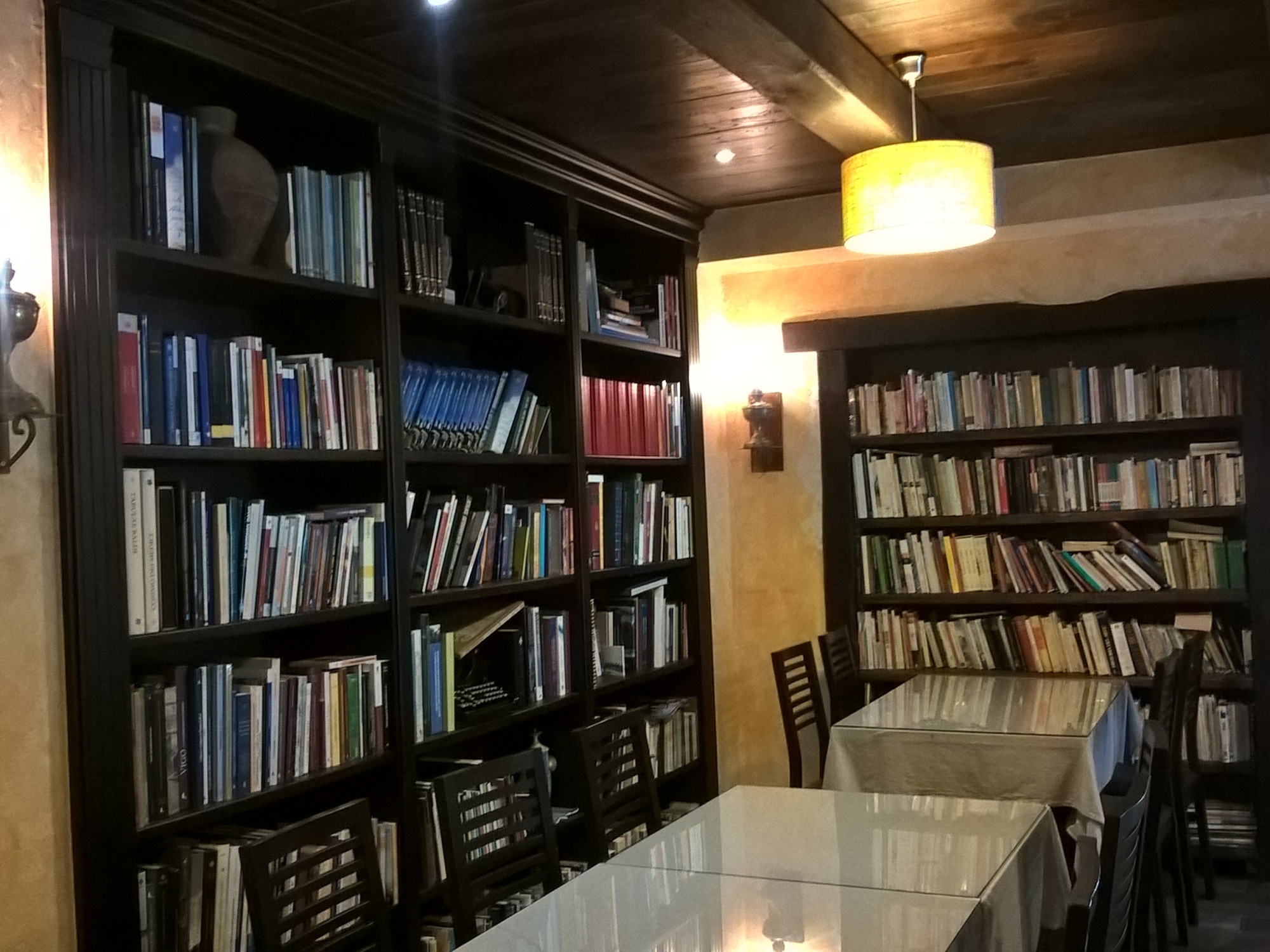 As the previous two days had been cold and rainy, it’s only fitting that this day started the same. That’s okay though, I had an excellent night’s rest in Triacastela, I had a fresh batch of machine-washed clothes, and warm weather was in the forecast!

Let me first say that I am fairly low maintenance and not much of a whiner. But a few times in this series I’ve mentioned the greatness of machine-washed clothes (a phrase I’ve never used before)…the benefit is they are thoroughly cleaned and thoroughly dried.

This isn’t possible most of the time when hand-washing. Washing by hand removes only the surface layer dirt and smell. And with limited space on the clothesline, often my laundry would still be damp. If so, I would roll it up and pack it in my backpack, which mostly led to funky, new smells. The other alternative was to have the damp clothes festooned on the outside of my pack in hopes they would air out on the day’s walk. So one of the little things I came to appreciate was good, machined-washed clothes. And Complexo Xacobeo gave me a sweet deal on my laundry, even did all the work for me! 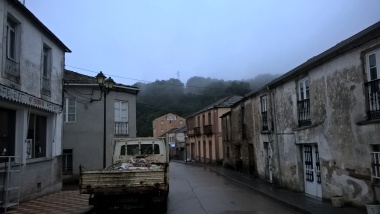 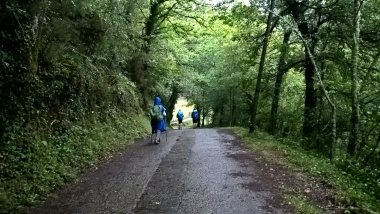 By mid-morning the rain stopped, the skies became partly cloudy, and the temperatures climbed. The walk this morning was enhanced by some really good conversations with a few Australians about spirituality, church, sports, work, and the grind of getting by in today’s world.

In Sarria, a major town along the Way, I stopped for lunch. It was a quest for my personal Holy Grail, the perfect American Cheeseburger in Spain. What I found in Sarria was okay, but not enough to end my quest… 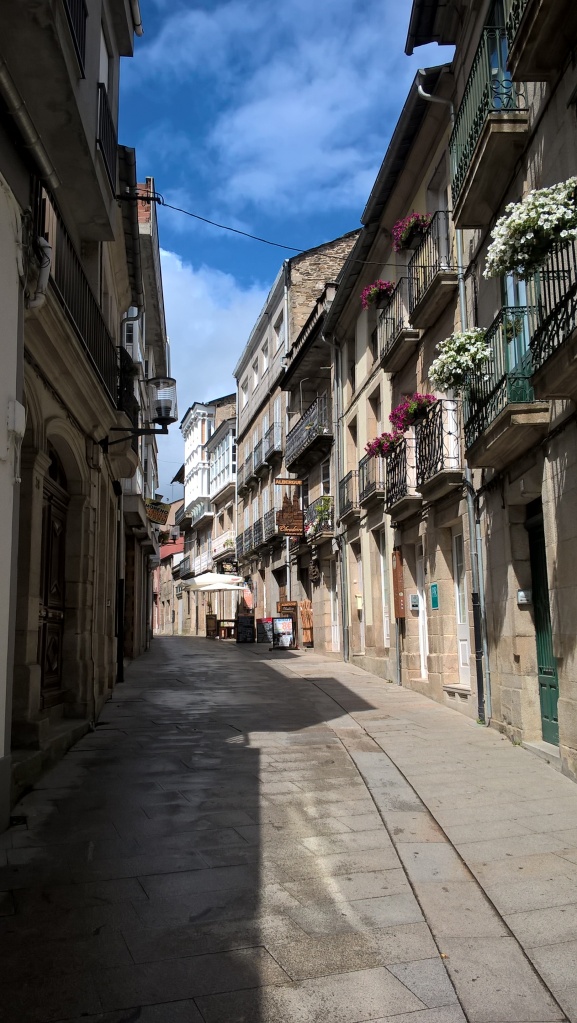 Sarria is a significant town on the Camino. For those that want to get the Compostela, Sarria is the closest entry point to become certified. As such, those with limited schedules will travel to Sarria and walk the last 120 or so kilometers into Santiago. The guidebooks say to be prepared for large crowds and packed albergues. I held firm to my “no reservations” practice. I have also been consistently staying “off stage” most days. My plan for today was to travel through Sarria to Barbadelo, a little town not far to the west.

I cleared Sarria and made it to Barbadelo in the early afternoon and got a bed at the first albergue in town. It was a new place – very nice and reasonably priced (I think 8€ for the bed). There was a little store, restaurant, swimming pool (too cold), and a library!

While nestled into a comfortable chair in the library, I realized I had made a tactical error today. I realized I only had 15€ on me, not a major problem, since my bed for the night was paid for.

The problem was that today was Saturday, around 4 pm, and in 8 short hours, it would be Sunday (Captain Obvious?). My ATM card does not work in Spain on Sundays. So I had to hustle out into the streets of tiny Barbadelo in search of an ATM. Barbadelo is small and it took me about 10 minutes to figure out there was not an ATM in the town.

On to Plan B, or the Austerity Plan. I had to make the 15€ last through tonight and all day Sunday. Then I would get more cash on Monday morning. I could make it work, figuring 10€ for a bed tomorrow and 5 for food. That meant no Rioja or Estrella tonight and no food (not a problem, I had snacks). And that was assuming there were no places along the way that took credit cards. Those I had…

With Plan B in place, I nestled back into my chair in the library.

I was reading Monsignor Quixote by Graham Greene when a man came over to the chair next to me and nestled in himself. He had a bottle of Rioja and two glasses. He asked if I would like to share the wine with him. I did.

We had crossed paths a few times since Saint-Jean but had never interacted. He was an Englishman, around 60 years old, and this was his sixth Camino. He was a great guy and very interesting to talk to. And generous with his wine, he didn’t know I was on the Austerity Plan.

While we were conversing, 5 guys came in and nestled near us. Their conversations were in Spanish but occasionally a couple of them would exchange very fluent, very American English words. I asked where they were from. They were all living in Florida now but were from all over – one from South America, one from the Caribe, and the others from the US. It wasn’t long until we were all engaged in a terrific conversation.

The Floridians invited me to dine with them. I explained my cash problem and with the familiarity of family, they all told me not to worry about it, they would take care of the meal. They were happy to share.

And they did. It was a great meal and they absorbed me into their group as if I had been with them all along.

I could still have made it okay on the Austerity Plan, but it was much more fun eating and hanging out with these guys…

Let me explain my lapse in judgment re: the ATM/Cash predicament…

When I get engaged in a project/adventure, I lose track of days and time…that’s the way it was on the Camino. In one of my journal entries I wrote, “all moments are fused into one.” The meaning of this phrase is that it didn’t seem to make much difference if it was Monday noon or Thursday morning, life on the Camino is simple and each day the same. After a few weeks, they all fuse together.

This is a beautiful and wonderful thing for someone that is trying to live fully in the present. Not so much so when related to tactics i.e. managing available cash…

Also on today’s walk, I encountered something that was in stark contrast to my willy-nilly, no reservations style…

There was a peregrina on the east side of Sarria that had a backpack-mounted, Bluetooth speaker connected to her iPhone. Siri was guiding every step:

“You will turn to the left in 38 seconds at your current pace.”