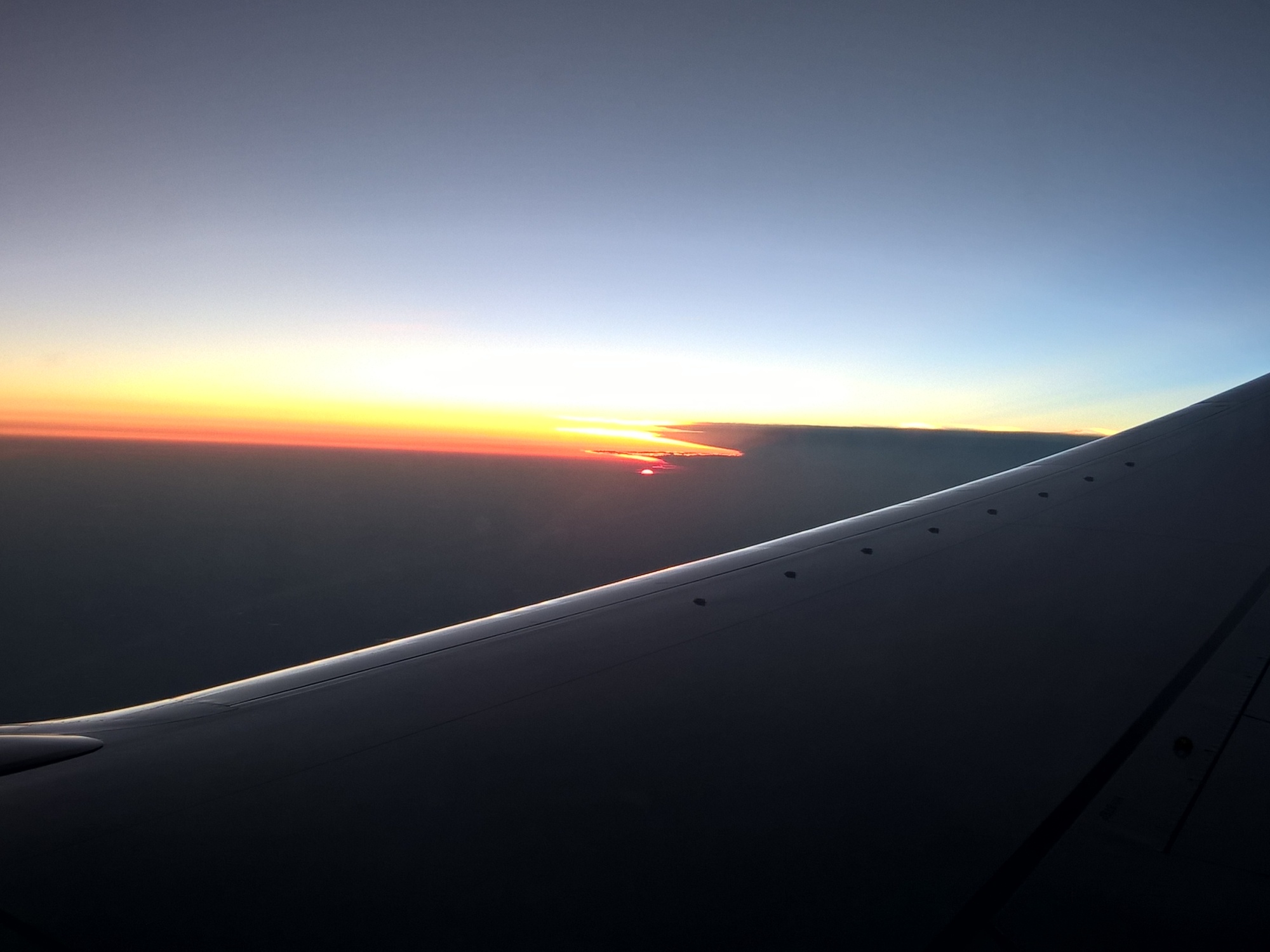 In my dream world, I would be the Forrest Gump of pilgrims…

I would walk from Saint-Jean-Pied-de-Port to Santiago or Finisterre and then turn around and walk back to Saint-Jean. Then back, then back again, until that day that I grew tired of pilgrimage.

Sadly, I don’t have the funds to support my dream world. I wonder if corporate sponsorships are available? North Face, REI, Estrella Cerveza, KLM Airlines? I could be a walking pilgrim billboard!

With the final amen at the Pilgrim Mass, I changed from pilgrim to tourist. The only pre-planned part of my pilgrimage was airfare and my departing flight was still five days away.

The original idea in the back of my mind in the case of such a scenario was to go back to Pamplona and spend a few days there at the Fiestas de San Fermin. Seemed like a must-do event when one’s time in Spain overlaps with the festival. After half a day of research, I found that it was nigh impossible to get Pamplona from Santiago except by foot. And my feet vetoed the idea. 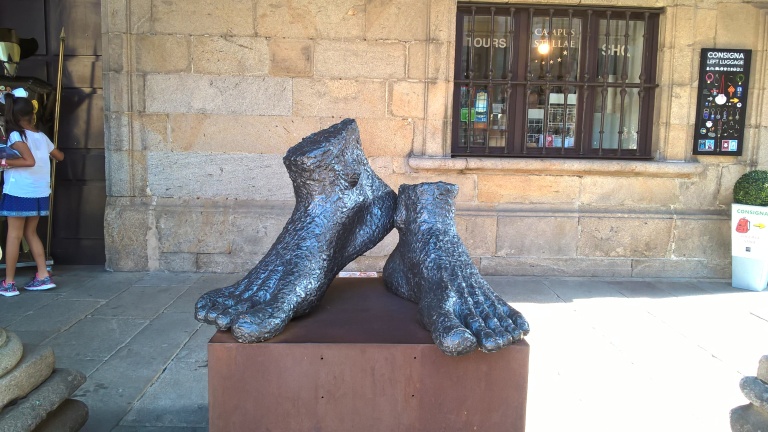 Perhaps a stroll to Finisterre? The thought of seeing the ocean from this place had some appeal but I had never made that a goal. Vetoed. A motorized trip to Muxia/Finisterre, nah. I decided to stay in Santiago to work on getting my flight moved closer and to explore the city. I got a private room at a Pensión up the hill from the Cathedral and settled in. I commenced travel-agenting and exploring. 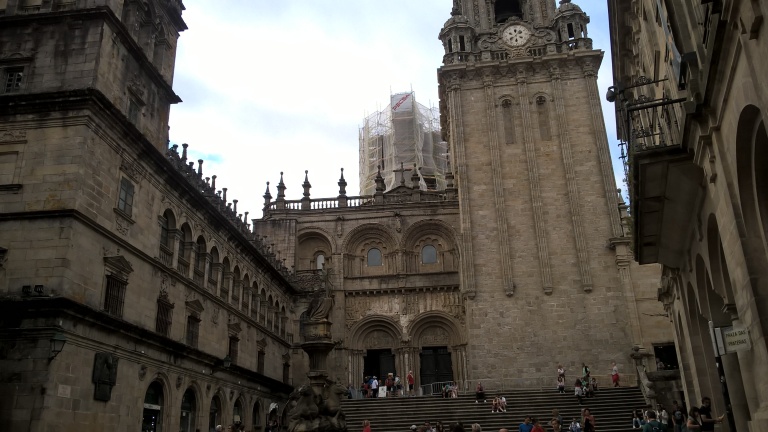 I spent two and a half days exploring every nook and cranny of old-town Santiago. It is a wonderful place, dripping with religious history. 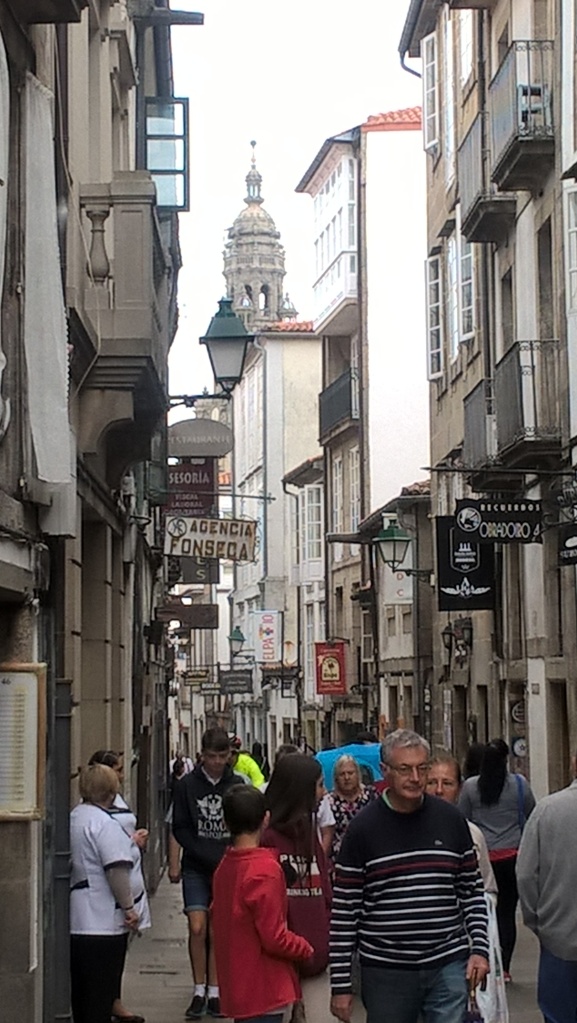 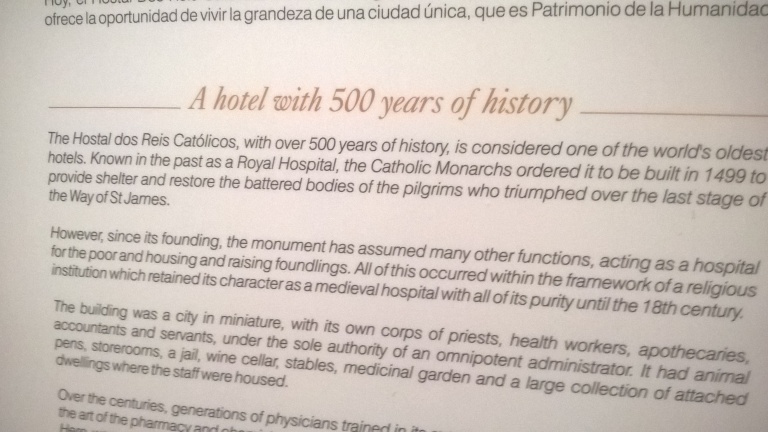 One of my favorite things (I’m easily amused) discovered was this sign in the Hostal dos Reis Católicos (the beautiful hotel on the Praza do Obradoiro). Note the last sentence of the first paragraph, “…ordered it to be built in 1499 to provide shelter and restore the battered bodies of the pilgrims who triumphed over the last stage of the Way of St. James.”

Now they shelter and restore the battered bodies of pilgrims for a mere 197,00€ per night. In future pilgrimages, I will scrimp and save along the way in order to be sheltered and restored here! 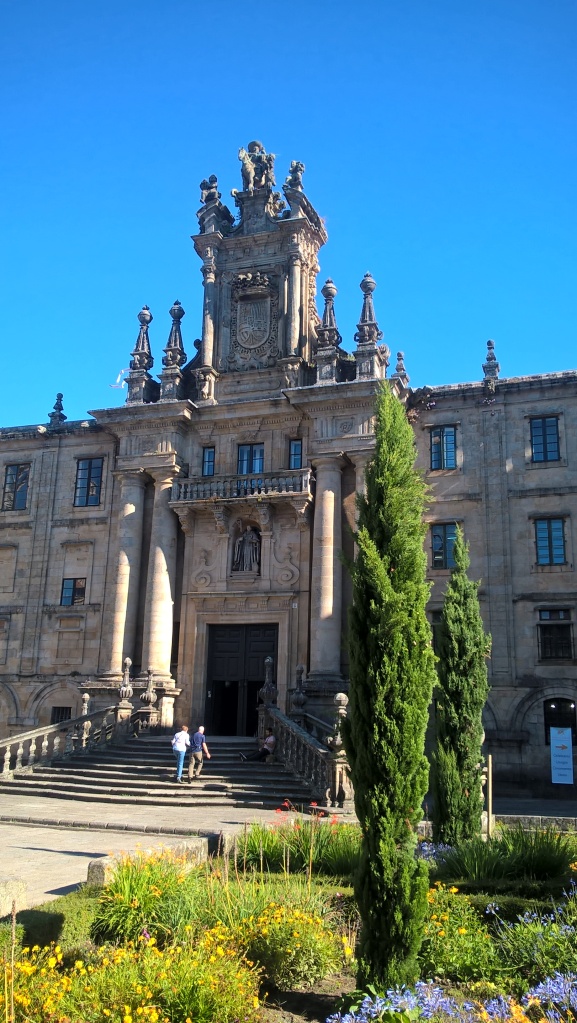 After 2.5 days and no clear-cut mission, I was ready to go back to San Antonio. With the help of some friends, I was able to fly home via Santiago-Barcelona-Charlotte-Dallas. My young Camino friend from Denmark and I split an early morning cab ride to the airport.

It was a strange feeling riding in a cab after thirty plus days of traveling at my own foot-speed. I held on for dear life and the cab driver whipped in and out of traffic. I was inclined to cry out, “slow down!” but in a moment of cautious preservation of dignity, I glanced at the speedometer…45 kilometers per hour. Not quite the speed-of-sound pace I thought we were traveling.

Despite the recklessness of the driver, we made it the airport. After a hug and a Buen Camino, my friend and I parted ways. He to Denmark and college and me to San Antonio and who knows what next.

Pilgrimage, the sacred journey, removes the distractions and reminds us that life is good and that joy, thankfulness, and hope are always within reach.